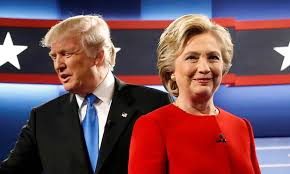 Nothing sticks to him — not his own admission of groping women, not videos of him mocking the disabled, not demonizing immigrants and minorities, not boasts of avoiding taxes, and not his consistently falsifying facts.

Everything sticks to her: charges of endangering national security, allegations of corruption, rumors of marital compromises, with little regard for her well-chronicled record of public service.

he big question some 48 hours before Election Day Tuesday is whether hillary has managed to stall Trump momentum that wiped out an 8-10 point lead – and reduced it to just a point or two — in just two weeks after the law enforcement insiders muddied the political waters with damaging leaks.

There is no precedent in modern US electoral history for such a meltdown in so short a time; Michael Dukakis blew an 18-point lead of over George Bush sr in 1988, it was early in the campaign and over a longer period of time.

Much of it is because Clinton has been portrayed as an establishment candidate who will not bring anything new or fresh to the table in an America where disenchantment reigns.

The Clinton campaign also rolled out a new ad featuring the popular singer Katy Perry’s song Roar, but it was Trump who was rumbling in Hershey, Pennsylvania (another battleground state), home of American chocolates.