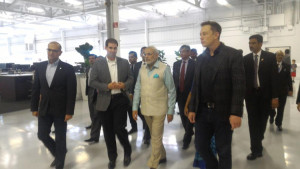 With renewable and alternative sources of energy high on his priority list, Prime Minster Narendra Modi on Saturday paid a visit to the headquarters of Tesla Motors at Pao Alto to get a feel on what could drive the automobiles in the future.

Tesla Motors’ iconic CEO Elon Musk gave Modi a tour of the company’s trend-setting electric car plant in Palo Alto as he arrived for a tech tour of Silicon Valley.

Modi, on a 36 hour whirlwind tour of Silicon Valley to give a strong push to his drive for technological innovation in India, visited the Tesla Motors plant to see the path-breaking inventions on renewable energy.

“Prime Minister Modi and I talked about electricity generation and how there are ways to skip ahead with it as with cellphones,” Musk, the company’s principal engineer, inventor and investor, said later.

Modi, who had landed at the Norman Y. Minte San Jose International Airport, was driven around the facility in a battery-powered cart after which he also posed for some photos standing next to a gleaming red car manufactured by the company with chief executive Elon Musk.

The trip to Silicon Valley forms part of Modi’s visit to the US’ west coast – the first by an Indian prime minister in more than three decades.

During his two-day stay in Silicon Valley, he would begin and conclude his engagements with the Indian-American community, the last one being an address to a crowd of over 18,500 Indian-Americans at the SAP Centre in San Jose.